Firth of Forth shellfish outlet opens to public in Pittenweem 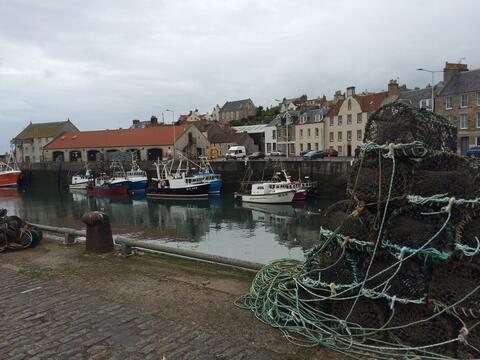 A new initiative led by the Fishermen’s Mutual Association (Pittenweem) Ltd (FMAP) to encourage locals and tourists to eat more of the seafood caught around the Fife coastline has been set up in Pittenweem, East
Fife.

Locally landed lobster, crab and langoustine caught in the Firth of Forth, which will have no food miles, is now on sale to the general public at a brand new FMAP Seafood Kiosk set up at Pittenweem Harbour, where
the shellfish are landed. The outlet, which will be open every day until the end of August and run by local fishmonger, George Allan, has been set up to make fresh, locally caught seafood available to the public. This is the first time the fish has been on sale directly to consumers; normally it is only available to trade buyers in the neighbouring fish market, with 95% of the annual catch exported to Spain, Italy and France.

The kiosk has been open since the end of June and is already proving extremely popular with locals, who are buying lots of lobster and langoustine, and walkers on the Fife Coastal Path, who are taking advantage of the dressed crab for their packed lunches. Tom Mackenzie of the Fishermen’s Mutual Association (Pittenweem) Ltd (FMAP) said: “It is no secret that Scotland exports the majority of the fish and shellfish caught around its shores, with many Scots not realising that the delicious seafood they are enjoying on holiday in Spain has actually come from just up the road at home.

“Fife’s coastline is brimming with delicious shellfish and the aim of this kiosk to give people an easy way to pick some up for themselves and try at home. Fish is healthy and delicious and I believe it tastes that wee bit
better when you know just how fresh and local it is.”

Geoffrey Smeddle, chef proprietor of the Michelin starred Peat Inn near St Andrews said: “Scottish seafood is prized by top chefs on the continent and yet strangely hard for members of the public to buy here. In an area blessed with outstanding produce, this wonderful initiative marks the most exciting development, bringing exquisite local seafood to local consumers.”

The FMAP Seafood Kiosk is open seven days a week in July and August and weekends in September and is located in Pittenweem Harbour next to the fishmarket. Prices vary, but on average lobster is £15 per kilo,
prawn tails are £10 per kilo, dressed crabs are £5 each and five langoustines are £12.50.