FAR FROM THE TREE PRODUCTIONS IS GOING FAR 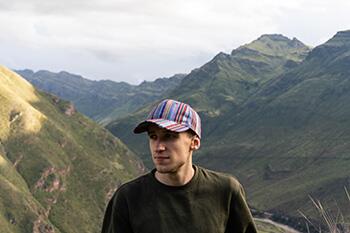 FILM producer, Josh Davie, gets up and running with help from Business Gateway Fife.
Far From The Tree Productions, was established by Josh Davie a year ago, to produce film content (short film and feature documentaries) with an engaging creative story.
Success has come in the early stages of business, with Josh having co-produced a multi-award-winning short film for an environmental film festival in America. He has also directed a documentary on a Scottish Farmer’s innovative journey into the origin of agriculture in Peru.  Recently he was in Uganda filming a short promotional video for a charity.
Far From The Tree Productions got a helping hand in its establishment from Business Gateway Fife. Josh Davie said:
“My business adviser, Marissa Yassen made me think more about what I’m doing as an achievable and sustainable business, and this year I went full-time self-employed.”
Grants from Business Gateway Fife allowed Josh to afford equipment essential for professional film production, including video heads for tripods and editing software, whilst he saved and bought the bigger items such as a camera and microphones.
Adviser, Marissa commented: “Investment in new equipment has meant that Josh has taken Far From The Tree Productions to a new level in a relatively short time. He has taken advice on board, has shown real commitment in forward planning and has focused on developing the business to be sustainable.  I have great confidence in Josh’s ability to grow and nurture the business for long-term success.”
Josh concluded:  “I hope I can continue to work with Business Gateway Fife and utilise its services to enable the outsourcing of additional services to other creative local businesses.”