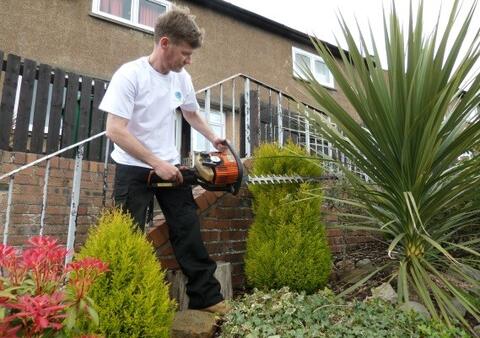 Paul Drysdale recently started his own business, Abbey Gardens, through a range of help and support from West Fife Enterprise, The Prince's Trust and Business Gateway Fife.  Read more about how Paul turned his idea into a business.

Paul’s experience of school was not a particularly good one. He left with no qualifications and no clear idea as to what job he would like to do. It was the early 1980’s, unemployment was high and opportunities low. Paul ended up on a Youth Opportunities Programme which did not lead to any long-term job opportunities.  It was only in his early 20’s Paul found work in the retail sector. The first with ASDA and then with the Cooperative Society; these lasting for just over 2 years. Unfortunately Paul had to give this up work to become a full-time carer for his mother who had been diagnosed with a degenerative illness. This role, he fulfilled until his mother’s death some years later. Paul now found it extremely difficult to find work. He said “With no experience or qualifications it was proving really hard to find a job…I was therefore unemployed for some time…no-one seemed able to help”.

Several years passed when, in conversation with a neighbour, the subject turned to self-employment. Paul said:

“It had never occurred to me before but my neighbour suggested there must be something I enjoyed doing or was good at…gardening I said…landscape gardening. I can do that as I had always did gardening for family and friends and really enjoyed it."

At his next visit to Job Centre Plus, Paul enquired about working for himself. After a brief conversation with his advisor he was directed to West Fife Enterprise where he could enrol within their Employablity Academy for advice and support.

"I registered with them and a couple of weeks later I was on a DWP sponsored course at West Fife Enterprise course called Step Up to Work”.

Paul continued “It was one of the best decisions I have made. The staff at WFE really looked into what each individual wanted from the course…some wanted a full-time job, I wanted to start my own business…whatever it was, you got 100% support from staff”.

Paul got advice and training on those subjects that would support his attempts to go self-employed: computing applications; finance; technology in business; writing business letters and other documents – rudiments of a business plan.

At his “Focus” interview Paul was introduced to Eddie Traynor an employment liaison officer at WFE, to determine how he might go about starting his own business.  Eddie arranged for Princes Trust Advisor Marissa Yassen to come in and give a general talk about self-employment and then interview Paul on his own.  As a result Paul was referred to Business Gateway Fife and was invited onto their business start-up course and given his own business advisor.  A business and financial plan were soon developed and within a couple of months Paul was up and running with his own Gardening and Landscaping company “Abbey Gardens” of Dunfermline.