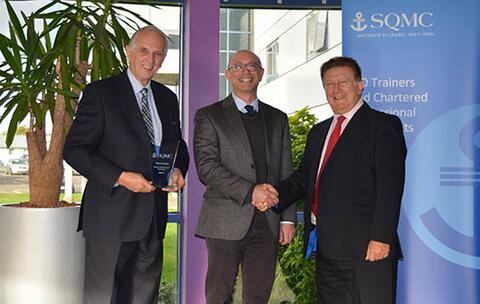 World Quality Day is a United Nations initiative championed in the United Kingdom by The Chartered Quality Institute (CQI) and supported in Scotland by the Scottish Quality Management Centre (SQMC).

Each year, SQMC mark the occasion by presenting a trophy to their awarding panel’s ‘Quality Professional of the Year’. The accolade for 2015 was yesterday presented to Steven Black: Quality Manager of Glasgow pre-stressed lintel manufacturer, Robeslee Concrete Company.

SQMC Technical Director, Ron Rivans, nominated Steven for the award having been an admirer of his work for over 20 years.

“When I submit my nomination for the Quality Professional award each year, I’m looking for someone who has embraced the spirit of a Quality Management System in a simple yet efficient form,” explained Ron during the ceremony.

“I’ve followed Steven’s progress in his career for many years in the capacity of a 3rd Party Certification Auditor, and his proficiency is particularly notable, in that he has maintained Robeslee’s system so efficiently; and implemented the clauses of ISO 9001 without any fuss whatsoever. He covers such intricate details, but in a down-to-earth manner. Under his management, Robeslee are successfully meeting the ultimate goal of ISO 9001 certification: consistency; and their customers are reaping the benefit.”

“What’s also interesting is how Robeslee use their Quality Management System as a performance-monitoring business tool, in terms of yield, reducing complaint levels, and increasing productivity.”

Founded in in 1967, Robeslee have literally played a foundational role in the construction of some of the country’s largest developments. They provided various products used in the creation of Glasgow’s Commonwealth Games Velodrome, and supplied the lintels for (Scotland’s biggest) Queen Elizabeth University Hospital. Involvement in projects of such magnitude is thanks largely to the company’s Quality-centric reputation, formalised through Steven’s work behind-the-scenes.

“I think like many people in my line of work, I just fell into a career of Quality Assurance,” said Steven after receiving his award. “It was about 20 years ago, and I was already involved in production – or ‘operations’ as it would be known today – and so being so involved in the company’s ‘nuts and bolts’ made me a good fit for the role.

“It took a year to get our Quality Management System up to the level required for certification against the International Standard of the time – ISO 9001:1994, and we’ve maintained it ever since; through two transitional revisions, with a third transition about to be tackled to upgrade our system to ISO 9001:2015.”

“I’m delighted for Steve to receive this award,” continued Ron, “and for such a well-run company to receive recognition of their impressive efficiency. This is a company who felt the impact of the 2008 downturn just as badly as its competitors and peers within the construction industry. But – through inspired management – were able to weather the storm without any redundancies, and are now going from strength to strength.”

Student of the Year award

A second trophy would normally be presented by SQMC on World Quality Day – for the ‘Lead Auditor Student of the Year’. However this year’s winner, Tomas Svoboda, is from the Czech Republic, and the trip to Dunfermline to collect the trophy was understandably impractical.

“Tomas attended a Lead Auditor course that we ran in June for our clients, Stock Polska, in Lublin, Poland,” said SQMC Operations Director, Kenny Hannah. “His performance throughout the weeklong course, and his grasp of the subject was extremely impressive; and he even acted as an unofficial translator at times to help his Czech colleagues colloquially understand certain examples and points being made by our trainer!”

SQMC’s Quality Management Systems ‘Lead Auditor’ training is the company’s flagship course. It was the first available in Scotland with full international accreditation, back in 1992; and with an industry-leading pass rate of 94% attracts customers and students from all over the world.

Stock Polska is Poland’s premier supplier of clear vodka and vodka-based liqueurs, with Poland being the third most valuable vodka market in the world. Their business development strategy includes closer integration with suppliers and logistics providers – which is where ISO 9001 and SQMC come in.

Tomas’s tutor during the course was SQMC director, Karen MacKenzie.

“Passing the ISO 9001 Lead Auditor course first time is no mean feat,” she said, “as anyone who has sat this advanced external examination will tell you. So undertaking the training in a foreign language was particularly impressive.”