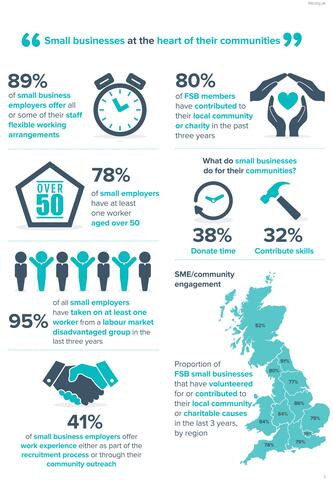 The Federation of Small Businesses’ (FSB) latest report has revealed the scale of which small businesses contribute to the local jobs market and community. Garry Clark, Development Manager for FSB in the East of Scotland, explains more.
We have long known that small businesses are at the very heart of local communities but a new report from the Federation of Small Businesses (FSB) has revealed the true extent of this.
The ‘Small Business, Big Heart’ study examines the contribution of smaller firms to both local jobs markets and to the success of their neighbourhoods. It found that 82 per cent of Scottish smaller businesses had contributed to local causes in the last three years, in comparison to 80 per cent across the UK as a whole.
The research also finds that a third of Scottish businesses (33 per cent) have contributed the skills of their enterprise to their local community, such as a local restaurant giving free cookery classes to low income families. In addition, almost two fifths (39 per cent) of FSB’s Scottish members say that they’ve donated their time to local communities, such as running local clubs or organising events.
Right across the UK, we are also finding that small businesses are often at the front of the queue when it comes to giving people a chance through employment. Smaller businesses are more likely to hire those from harder to reach groups than big corporations. The vast majority (78 per cent) employ an older worker, a third (34 per cent) have a member of staff with low levels of educational attainment, and a similar share (30 per cent) employ at least one person with a known disability or mental health condition.
Small businesses have often become synonymous with the communities they serve, and it is natural for them to do right by these communities where business owners not only work but often live. That is why FSB continues to campaign to ensure that Scotland’s small businesses receive the support they need from government at all levels. The community spirit fostered in most small businesses is representative of the kind of inclusive growth that government is seeking in the economy and the evidence shows just how important it is that small businesses get that little bit of extra help to ensure that they can continue to support communities the length and breadth of Scotland.
Breaks for these businesses in terms of business rates, public procurement and national insurance contributions will all represent sensible investments by government in the futures of our small businesses and the communities they support and serve.