Optos' Mission To Save Eye Sight Is Recognised 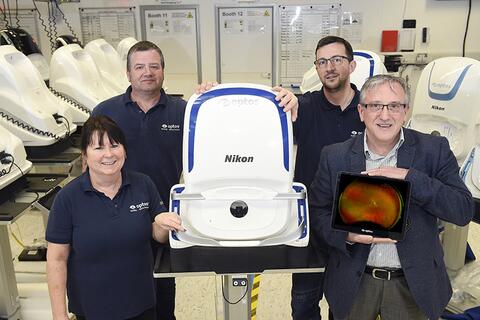 Optos, a Dunfermline-based company that specialises in the design and manufacture of advanced retinal imaging technology, has been recognised for its innovation with a 2019 Queen’s Award for Enterprise.
It scooped the coveted accolade for the design of its California device, which was developed and manufactured in Fife.
This is the third time Optos, which has sold more than 15,000 of its ultra-wide field imaging devices to eyecare professionals worldwide, has been awarded a Queen’s Award, having previously won for Enterprise in International Trade in 2001 and 2007. The Queen’s Awards for Enterprise recognises businesses in the UK, which excel in international trading, innovation or sustainable development.
Robert Kennedy, Optos CEO, said: “To be recognised by such a prestigious business award is a great achievement for the entire team in the UK and across Europe, North America, Asia and Australia. It is testament to their efforts to provide our customers with the best devices to support their clinical care and help to improve practice efficiency. Most of all, it reinforces our commitment to keep innovating in the fight against vision loss.”