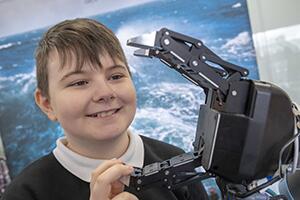 More than 300 schoolchildren from primary schools in Fife, South Queensferry and Dollar have taken part in a Festival of Engineering at Babcock’s Rosyth site.
The two-day event saw primary 5-7 pupils try out a range of exciting engineering activities, from virtual welding and virtual reality, to 3D printing and racing cars.
The event took place at Babcock’s engineering centre, the William Rankine Building, with the children making their way around six zones of cutting-edge engineering innovations.
Morag Hay, a parent helper at Dunnikier Primary School, whose daughter Lauren attended the event, said they were inundated with requests from pupils to attend and could have easily filled their allocation of spaces twice over.
She said: “Events like this are great because they engage children at a young age before they go to high school, and help to give them a passion for engineering.
“It was really good to see so many girls at the Babcock Festival of Engineering because I think a lot of girls believe that engineering is not their thing and it’s just for boys, but everyone found the event really interesting.”
The Babcock Innovation team showcased its iSupport360 offering at the Festival via an immersive simulation experience, as well as its Remotely Operated Underwater Vehicle (ROV). A drone demonstration provided additional fun for the pupils.
Bradley Irvine, P7 pupil at St Joseph’s RC Primary School, said he would consider a career as an engineer in future. The 11-year-old added: “The event has been great; I really like technology and I love drones.”
Michael McComiskie, Junior Science Co-ordinator at Dollar Academy, said: “It was great to see our young people so enthusiastic about engineering and really enjoying the Festival.
“We have a few budding engineers at Dollar Academy, so it’s fantastic to show them the real-life application of science and engineering at events like this.”
The 2019 Festival of Engineering followed the success of last year’s inaugural event, which took place at Babcock’s Rosyth site during the Year of Engineering 2018 – a government campaign to celebrate the world and wonder of engineering, which continues this year via a campaign called ‘Engineering: Take a closer look’.
Managing Director of Babcock’s Rosyth site, Sean Donaldson, said: “The aim of the event was to encourage the pupils to think about becoming our engineers of the future, and I think we definitely achieved that.
“It was fantastic to see so many enthusiastic and excited faces, and it was a real pleasure to host them at our Rosyth facility.”
Other attendees at the event included Paul Sheerin, Chief Executive of Scottish Engineering, and Liz Cameron OBE, Chief Executive of Scottish Chambers of Commerce.