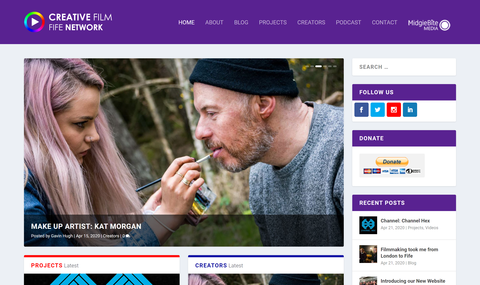 A new website to promote creative filmmaking in Fife has been launched by MidgieBite Media.
The Creative Film Fife Network, a group to celebrate and promote local filmmaking, was launched in Kirkcaldy last year by video production business MidgieBite Media. Since then, networking events have been held and an active Facebook group has helped to connect local filmmakers and showcase film projects throughout the Kingdom.
Following the cancellation of a planned networking night at the Kings Live Lounge in Kirkcaldy due to the coronavirus outbreak, MidgieBite Media has turned their focus online.
The online magazine launched on Saturday 25th April, and was developed by MidgieBite Media founder Gavin Hugh working with Niki Paterson of Niki Paterson Web Design.
Gavin Hugh, founder of MidgieBite Media and the Creative Film Fife Network, commented: “There is a wealth of creative film talent in Fife, from actors to directors, musicians to make up artists, costume designers to writers. Fife is filled with incredible creators and artists, all of whom do amazing things in unique ways.
“Unfortunately, those creators often work in isolation from one another, with local filmmakers frequently unaware of the opportunities and like-minded folk right on their doorstep. The aim of the Creative Film Fife Network is to change that.
“With the coronavirus pandemic, a lot of filmmaking plans are on hold, which is incredibly frustrating for all of us. This new website hopes to keep people motivated and inspired by showcasing and celebrating all of the amazing projects and talent that’s here in Fife.
“Working with Niki Paterson, we’ve developed this site over the last few weeks while in lockdown, and I’m delighted that we can now share our efforts with the filmmaking community in Scotland.”
The new website launched with 10 articles, with plans for regular updates and features. Articles include interviews with local film talent, spotlights on local film productions and blog posts from the filmmaking community. A new podcast series has also been launched, hosted by Gavin.
Highlights include spotlights on the upcoming WW2 action feature Dick Dynamite by Robbie Davidson, as well as the new online Channel Hex project from Kirkcaldy-based horror filmmakers Hex Studios.
A blog post from horror filmmaker and film journalist Sam Ashurst details his relocation from London to the Fife coast to pursue new filmmaking opportunities in the Kingdom.
Sam, a contributor to Total Film magazine, Digital Spy and others, is also the first guest on the first Creative Film Fife Network podcast, which launched on Sunday 19th April as part of the online project.
“It was fantastic speaking to Sam,” added Gavin. “It was particularly fascinating to hear about his experiences in film journalism – meeting people such as Quentin Tarantino, Margot Robbie and David Lynch – who appears to have played a year-long practical joke on him!”
MidgieBite Media is keen for the site to showcase a variety of film talent across a number of fields. Interviews at launch include actor Craig J Seath, make-up artist Kat Morgan, special effects artist and costume designer Keith Robson, and composer Jessica Henderson – all of whom live in Fife.
Gavin added: “This website can put a spotlight on local creators, showcase new film projects, and promote Fife to the wider filmmaking community in Scotland and the rest of the world. We want to hear from anyone who has an interesting story or a project to share.
“I want this website to give local filmmakers a chance to tell their own stories – to be inspired, to discover new talent, and to encourage all of us to reach out and work with others.”
The Creative Film Fife Network website can be found at: https://creativefilmfifenetwork.scot/