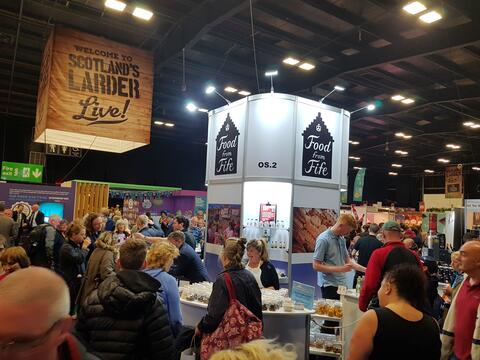 Thousands of visitors enjoyed the chance to sample and buy some of the best Food and Drink offerings from Fife businesses at the 2019 Royal Highland Show (RHS). Now in its 178th year, the RHS attracted around 200,000 visitors to Ingliston showground for a four-day showcase of the very best of farming, food and rural life.
Fife Council’s Economic Development team in partnership with the Food from Fife network set up a bespoke designed group stand at the RHS, to showcase some of the very best produce that Fife has to offer. The Economic Development team secured a prime site within Scotland’s Larder Live main hall, ensuring that the eight businesses had an ideal location in which to tempt the visitors to try and buy, their produce.
Eight businesses on the Fife Stand were St Andrews Brewing Company, Wemyss, Darnley’s and Kingsbarns, Heavenly Goodies, Lindores Abbey, Lundin Distilling, Rumburra Scotland Ltd, Tayport Distillery and Pilgrim’s Gin. With Farmers Son also receiving assistance from Fife Council to exhibit with their own stall at the International show.
As well as the Fife stand attracting a lot of interest from the public, Rumburra and Heavenly Goodies also had a chance to discuss how the two companies could collaborate to create new innovative products to compliment the Rumburra Truffles already produced by Heavenly Goodies in advance of the show.  Garry from Rumburra was delighted with the impact of attending the show highlighting; “It’s the first time we have been part of a Fife group stand and our first time attending the RHS.  The level of interest in our Rum brand was fantastic which allowed us to relay the story of the product to all of the visitors. Without the support of Fife Council’s Economic Development Team through their Trade Development Programme we would have missed out on this success.”
Cllr Altany Craik, Convener of the Economy, Tourism Strategic Planning and Transportation Committee said: “This is the first time Fife has been represented at the RHS in this way. I’m delighted to see food and drink businesses from across the Kingdom embrace the chance to come together, showcasing the high quality and innovative produce available from Fife. The Council recently agreed a Food and Drink Action Plan and this is part of the delivery of that plan and with many more developments to come, the support available to the businesses in the Food and Drink Sector continues to be strengthened.”
Other Fife businesses that also exhibited at the 2019 RHS included The Wee Tea company, The Just Slate Co (Homeware), Eden Mill (Gin), The Growers Garden (Broccoli Crips), The Shed (Coffee) and The House of Bluebell (Clothing).
Any businesses interested in finding out more about Fife Council’s Trade Development Programme should visit www.businessgatewayfife.com/trade-development-programme