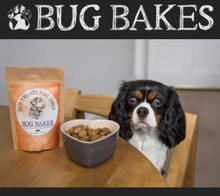 Company Name: BugBakes
Company Contact: Ross Lamond
Sector: Manufacturing
Solution: Digital BoostAdvice
Size: Start-up
Dog treats made out of insects will be hopping into the pockets of pet lovers after the launch of Bug Bakes.
The healthy snacks made out of ground crickets, oat flour, root vegetables and other all-natural organic ingredients come in handy bags that contain 50 biscuits and can be bought directly from www.bugbakes.co.uk
Creator, Ross Lamond, from Wormit, Fife, believes the biscuits are the first dog treat to contain insect protein in the UK, and claims the hypo-allergenic baked biscuits provide dogs with a sustainable source of protein, fibre, iron, calcium and all the essential amino acids they need.
The 23-year-old, who turned to Business Gateway Fife for start-up advice, is now hoping to sell his product wholesale to independent pet shops, veterinary practices, and directly to dog owners throughout the UK.
He said: “According to the Pet Food Manufacturing Association the pet snack industry is worth in excess of £434m and growing year-on-year. From my research I discovered there were no treats being manufactured for dogs using insect protein in the UK. That gap in the market gave me the inspiration I needed to produce my own biscuits using cricket powder. Not only are the insects nutritionally dense, they produce far less greenhouse gas and require minimal space, water and feed when compared with traditional farmed livestock. They can even be fed from a wide variety of food waste so their impact on the environment is minimal.
“I’d used Business Gateway’s website and then spoke to an adviser who put me in touch with the information service which gave me a list of pet food producers in the UK. Having that list, and calling all the contacts on it, helped me quickly realise that I would have to make the biscuits myself. Finding that out early allowed me to bring the product to market through my own hard work using an initial investment of just £1.5k. I’ve also received fantastic support in relation to other product development ideas that I am currently investigating.”
Shona Morrison, Business Gateway Fife, said: “Ross has big plans for his business and hopes to secure 50 stockists before the end of the year so he can move production out of the kitchen in his family home and into an industrial unit. He would then look to take on staff. Because he hopes to grow his online presence through digital marketing and by visiting trade shows we are currently discussing potential support through our DigitalBoost programme and via local funding schemes that would help him achieve his goals.”
The initial idea for the product arose after Ross read a paper by the United Nations that stated there was a need for greater insect protein consumption in the west. But it wasn’t until he began studying for his final exams that he started to research the pet snack industry and found a gap in the market for insect protein treats.
After sourcing human grade organic certified cricket flour from Entomo Farms in Canada, it took over three months to create his unique recipe. Each batch was tested on his late pet, Lyra, a Leonberger dog. The product was then tested on nearly 100 dogs, with the majority giving a wag of approval.
He said: “Lyra was the first dog in the UK to try Bug Bakes. Although she hated the first ones I made, she loved the ones I now sell. After she passed away late last year I wanted to pay tribute to her life and the huge part she played in helping me create Bug Bakes and that’s why she features on the packaging which I designed myself.”

If you would like to find out how Business Gateway Fife can support your business, please contact us on 01592 858333 or email success@bgfife.co.uk