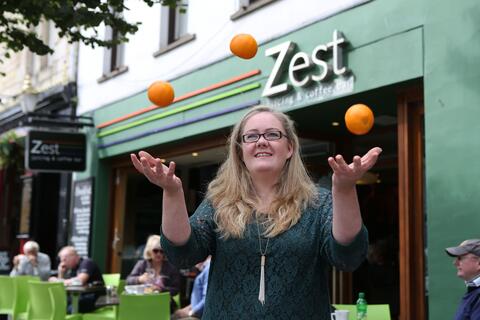 Stephen said: "Zest is an independent café and salad bar which prides itself on being an integral part of the community in the University town of St Andrews as well as working across Fife and Tayside and I'm delighted to be able to put them forward for this award."

"Six years ago Zest's owner Lisa Cathro involved her company in a Scottish Prison Service project which involved offering serving offenders coming up for parole work placements in both the café and salad bar and training them in coffee barista skills. The purpose has been to break down barriers, dealing with the prisoners' own preconceptions as well as those of their customers. The main objective is building confidence, getting them used to working as a team in a normal environment. The Zest team then help them with job references, their CV’s, if necessary, and are available if they need advice even after their release date.

"The team recently delivered training at HMP Castle Huntly Open prison where they started a six week employability program. This developed to include input from Springboard Scotland, the hospitality charity."

Stephen added: "In addition to involvement by Zest, Costa Coffee and a few independent café's in St Andrews also got on board with taking prisoners on work placements.  Zest's long-term goal is to get more coffee shops engaged with the program therefore significantly increasing the participants' prospects of employment upon release and, ultimately, decrease re-offending rates."

In his nomination, Stephen also highlighted the efforts the team at Zest have made to support people with additional needs.

He said: "Zest has run work placements in 10 week blocks for Fife Council Supported Employment working with people with additional needs.  This often involves people with learning difficulties and mental health issues. To further enhance this the whole team go through annual workshops on coaching skills, corrective coaching, disability awareness, and two members of the team are Mental Health first aiders with more of the team wishing to do this course."

Zest has also delivered placements for Enable Scotland, Springboard, xtra Mile, and the DWP and won Diversity Awards, Employer of the Year and SDS Modern Apprenticeship Awards 2014.  All of the team who are eligible have completed MA’S starting with SVQ 2 Food & Beverage through to Management SVQ3. Zest currently has two modern apprentices with one being supported."

Stephen added: "Within the Zest team, many employees including Lisa herself, have had barriers to employment, the most common being Mental Health issues. However, because Zest offers a supported environment where issues are recognised and dealt with positively, there is practically no sickness absence. In addition, two members of team have learning difficulties and with support in their workplace, are doing very well."

Lisa, who is also a Director on the ST Andrews BID (Business Improvement District) Board, is also working to raise employability standards and organise training for local businesses. She also represents the private sector on the Health & Disabilities group with Fife Council. And in addition to the café and salad bar, has also started a training company. Zest will also be supporting working in partnership with the University of St Andrews to make St Andrews a Dementia Friendly Community along with the University of St Andrews next month.

Stephen will know next month if his nomination for Zest has made the shortlist.

For details on Zest go to http://www.zest-standrews.com/