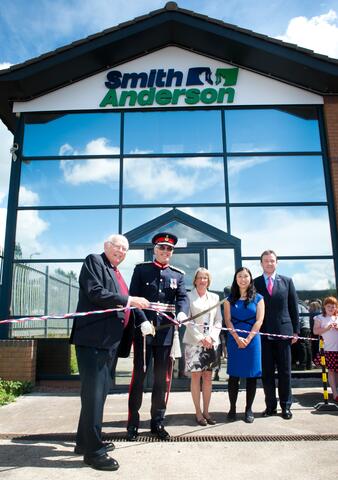 On Saturday 27th June 2015, Her Majesty’s Lord-Lieutenant officially opened the new Smith Anderson Paper Bag Manufacturing Facility in Kirkcaldy.  The company dedicated this special day to local Cancer Care charity Maggie’s Fife, to whom they have donated over £15,000 to in the last two years.  Smith Anderson staff have also helped Maggie’s raise thousands more through initiatives like the Big Give, by attending events and participating in the Annual Twilight Walk.

Smith Anderson was established by Charles Anderson in 1859 and remains a 100% family owned private company. The group which once had 7 varied sites operated its headquarters from the Fettykil Paper Mill in Leslie until 2006, after which the packaging company relocated entirely into the Falkland Site from 2007 until 2012. Over the past 3 years the company has slowly but very surely relocated its entire operations to Rosslyn Commerce Park in Kirkcaldy, concluding with the construction of a superb 2000 pallet finished goods warehouse, completed in June 2015. Customer service was unaffected during the process, which was the real success story.

“This is a memorable day for Smith Anderson. As a family company we have also relied on local families for over 150 years. At many stages of our development we have employed three generations of the same family working within Smith Anderson. People are our most valuable asset, so it is fitting to recognise all they have contributed to the success we enjoy. Rosslyn is a fantastic new site, with facilities we could only have dreamed of 5 years ago. I am extremely proud to be part of this transformation and feel very privileged to have led such a fantastic team. Consolidation after relocation is now complete and we are very optimistic that 2016 will be the first of many record breaking and profitable years for our staff, shareholders and customers alike. Having the Lord-Lieutenant formally open the new site is a great honour for employees past and present.”

“It has been fantastic to work with Smith Anderson they truly are an organisation that cares about the people in the community in which they operate.  Maggie’s relies on voluntary

donations to support and grow and to develop its unique, high quality programme of support. Our aim is to make the biggest difference we can to people living with cancer, their family and friends and it is great that Smith Anderson are committed to helping us achieve this.”