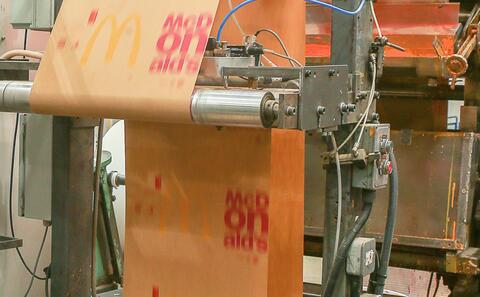 A 44-year partnership between a global food service restaurant chain and a local paper bag manufacturer is set to continue after a major three-year deal is agreed.
Smith Anderson, which produces sixty million paper bags every week, has signed a significant three-year deal with foodservice restaurant, McDonald’s; a continuation of a prolific 44-year-long relationship.
The partnership has brought sustained organic growth to the Kirkcaldy-based business over the years, with Smith Anderson’s total turnover from McDonald’s European restaurants now at approximately £17 million. And, Smith Anderson, which turns 160 years old in 2019, has worked hard for that; it has innovated and created new product ranges with new materials, designs and structure, to exceed its client’s expectations. The recycled content of the paper used for McDonald’s bags is now 100 per cent, which has benefited further from Smith Anderson’s ‘light weighting’ of material, whilst it will also move on to entirely sustainable ink systems during 2019.
Investment into its equipment and facility, which saw the business move to a new purpose-built facility in Kirkcaldy’s Mitchelston Industrial Estate in 2012, has been significant too.
This year, four new machines are being purchased and 24 new members of staff will join the 240-strong team. The capital investment of £3 million was made possible, in part, by a Scottish Enterprise Regional Selective (RSA) grant and follows positive financial results for the year ending 30 September 2018. Smith Anderson’s business revenues rose 15 per cent to £26.9 million.
Michael Longstaffe, Chief Executive of Smith Anderson, explains: “We have weathered a particularly challenging few years with raw material increases reaching 38 per cent, but emerge into 2019 significantly fitter and better prepared to optimise the trend towards more sustainable packaging solutions. Investment in people takes the form of an exciting company wide engagement project, which we are calling ‘Change4Good’.
“Innovation sits at the heart of our strategic plan. Gone are the days when simple, low margin commodity plain bags formed the backbone of our core markets. We continually optimise our product range with new materials, creating new products for numerous applications. Many of these provide added functionality, as well as commercial value and with that value comes improved margin.”
2019 brings growth opportunities. Smith Anderson has established a joint venture, HSA, in Poland with one of the world’s largest foodservice packaging providers, Huhtamaki, a Finnish-based operation. Working together the businesses will supply paper bags to foodservice restaurants from McDonald’s to Burger King and KFC in Central Eastern Europe. Starting cautiously with just three machines operating on this project, the plan is to expand HSA over the next three years, to incorporate a further three machines by 2022.
Michael added: “There is real potential to develop yet further international market share and HSA is creating additional supply contracts within Central Eastern Europe, which will drive our investment over the next five years. We are also drawing up plans to extend the Kirkcaldy building to accommodate a further six to eight machines, securing a longer-term future in Fife, for our dedicated and superb team.”