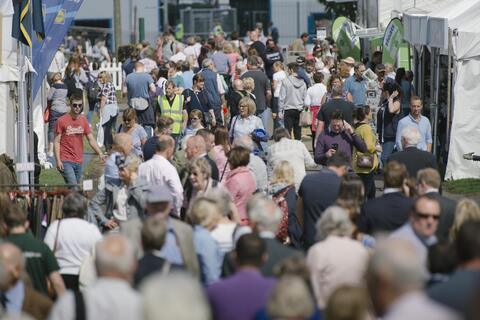 Over 187,000 visitors flocked to the Royal Highland Show over the last four days - with Friday playing host to 47,990 exhibitors, farmers, food producers and business owners, as well as the general public, who were digesting the results of the Brexit vote.

The historic announcement failed to engulf Scotland's biggest celebration of farming, food and rural life, which saw 7000 of the UK's finest livestock compete for £225,000 of prize money and 280 trophies worth around £2,000,000.

Following closely behind the livestock in terms of popularity was the Show's revamped 13th Avenue Arcade, which featured an array of luxury retailers, offering fine furniture, jewellery and art along with a new Prosecco bar. Over £8million is estimated to have been spent on shopping at the event.

Over 30,000 children attended the Show for free over the four days, with many learning about food, farming and the countryside at the Royal Highland Education Trust's Education Centre.

The Show's food offering, Scotland's Larder Live!, also proved very popular. Featuring over 120 of the finest food and drink exhibitors from across Scotland and the UK, Scotland's Larder Live brought to life the main consumer message of ‘farming equals food' and was a lively, stimulating, informative and interactive area full of smells, sights and samples.

Commenting on the success of the 176th Show, Royal Highland and Agricultural Society of Scotland (RHASS) chairman, Willie Gill, said: "Once again the Royal Highland Show has proven that, along with being the country's premier exhibition for the finest livestock, it is one of Scotland's favourite days out. It is also a great stage on which to do business, and we know that a number of deals have been struck over the four days, which is great to hear.

"A lot of planning goes into this event and I'd like to take this opportunity to thank all of our exhibitors, sponsors, staff and visitors, without whom the Show wouldn't be able happen, and who enable the of RHASS to carry out its charitable remit of promoting and protecting the interests of land based industries here in Scotland.

We are looking forward to seeing everyone back here in 2017 for what will be the 177th Royal Highland Show."

"We are delighted to have been able to play a part in this year's show and look forward to working together with the RHASS to build on this success in the years to come."

For more information go to www.royalhighlandshow.org