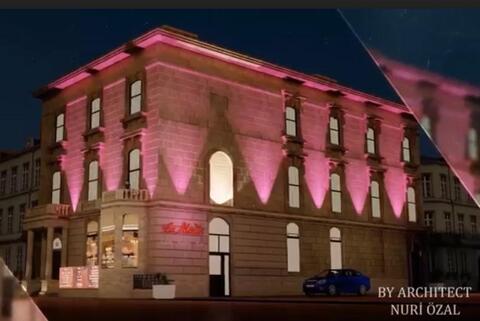 The business owner behind two of Dunfermline’s most popular eateries is set to give a major boost to the town’s potential as a short break destination, with the news that he is to create a new twenty four bedroom hotel above his thriving Bistro at 82 High Street.
Nihat Oymak, who operates what is currently La Menta in the downstairs part of the three storey listed building, and also has the award winning Antioch Turkish restaurant in Bridge Street, along with a tailoring business at East Port, is spending around £250k to create the hotel upstairs. He’s already spent £43k on redecoration of the downstairs area.
A popular venue for live music & events, La Menta was opened by Nihat in 2017. It now has a large local following for its food & drink. It’s being re-branded with the new name of Amorist Bistro Bar, to become Amorist Hotel Bistro Bar, when the hotel opens next Spring.
Work will commence straight away, with twenty en-suite bedrooms launching first, followed by an additional four more bedrooms, also en-suite, shortly afterwards.
It is hoped that Amorist Hotel, which will create around ten new full and part time jobs, will launch in March 2022. In the meantime, Amorist Bistro Bar, which has just launched its new Autumn Menu, will remain fully open throughout all the renovations.
Commenting on the new Hotel and re-branding, Nihat said: “We are very excited about creating this badly needed new Hotel right in the centre of the town. Not only is it attracting people to come and stay in the town, but it is giving a new use to another part of what is a beautiful old building, full of character. We don’t presently have many small independent Hotels in the town centre – we have been missing a trick in Dunfermline with so many attractive, listed buildings presently lying empty and near derelict waiting for a retail rebirth which simply will not happen. Attracting tourists to Dunfermline is something in which we can be proactive. There is no reason why the town can’t do well in the UK short break market with visitors from the West of Scotland, plus the North East and North West of England particularly.”
Nihat pointed out that, during lockdown, he had been busy giving Amorist Bistro Bar a new look.
“Rather than sitting and doing nothing at what was a very hard time for the hospitality industry, it was very much a case of preparing for the recovery,” he said. “Amorist Bistro Bar occupies a fantastic space with a traditional character features, such as high corniced ceilings and original windows, which we wanted to blend with modern fixtures & fittings.  We estimate a spend of around £250k on creating the new hotel. We’ve spent around £43k on new decoration, flooring, artwork and new furniture in the Bistro Bar downstairs. This new look downstairs is already completed, and is looking fantastic. We hope all our regular customers are very impressed, and it’s certainly a sign of what is to come upstairs, with a high class look, again mixing old and new, planned for the hotel bedrooms,” he said.
“We’d also like to stress that the business is still entirely under the same ownership with myself at the helm, heading up the day to day running, along with the same loyal staff and the same trusted suppliers, such as Campbells Meat and Lucas Ice-cream.  We have a formula that works here based on quality ingredients, good old fashioned service, and value for money. That certainly won’t change, and indeed is the bed rock of all my businesses.”
“We’ll shortly be revealing details of our festive eating and dining packages at Amorist, plus the entertainment schedule for the festive season, so please keep an eye on our social media platforms.”
Nihat also revealed that he was to open another business in Douglas Street. The Wee Shop, a traditional newsagent and convenience store, will open in the next two weeks.
“Dunfermline could certainly do with another independent newsagents, as again this is something the town lacks, so I feel that The Wee Shop will do well,” he said.
Nihat finished by saying that he also planned to celebrate the success achieved by   Antioch.
“The pandemic may have come along before we had an opportunity to properly promote this, but in 2019 Antioch picked up the prestigious accolade of Best Turkish Restaurant in the whole of Scotland, beating restaurants in Edinburgh and Glasgow,” he said. “We were delighted with this, as it’s a testament to the commitment of our chefs and entire team. We’re inviting restaurant critics to come and review us and want to put ourselves on the culinary map even more.”
“I’ve said before that Dunfermline could end up as one of the very best towns in Scotland – developing its hospitality sector, food provenance & tourism potential is definitely the way forward.”
For further details check out:
www.lamentacafe.com.
www.antiochdunfermline.com.