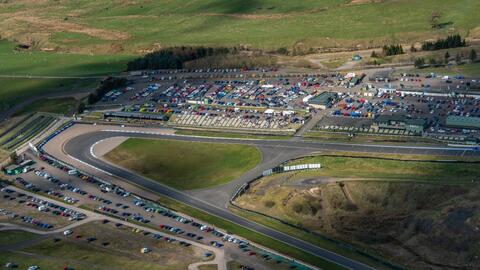 Knockhill Racing Circuit, Scotland’s National Motorsport Centre, has received significant international bookings from major automotive manufacturers.
Knockhill has long been established as a proven venue for vehicle launches, press days and a venue for all the automotive sector to use for events in Scotland.
Highlights include hosting Subaru’s world launch of a new model in the mid-1990s with guests being flown in from all around the world; as well as welcoming Porsche to celebrate the one millionth Porsche 911, with all of its 911 museum cars being transported to the motorsport centre from Stuttgart in 2017 and then again, this year.
McLaren also chose Knockhill for a special magazine feature on the P1 and Senna hypercars.
The use of Knockhill by the automotive sector continues to increase. The racing circuit has secured its largest and longest ever exclusive hire for 14 consecutive days this summer and, early enquiries are coming in for 2020.
Stuart Gray, Director at Knockhill Racing Circuit, said: “We are delighted that the domestic and international hires of Knockhill are increasing, as it benefits us, Fife, and Scotland as a whole.”