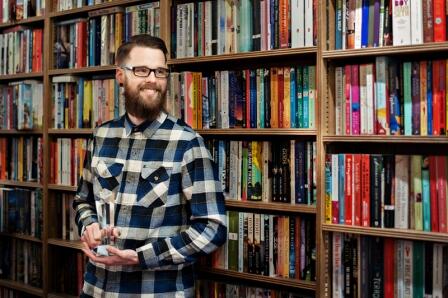 A Fife entrepreneur has scooped a top business award for the growth of his Kirkcaldy-based content marketing company.

Chris Marr, who hails from Leven, landed the High Growth Business of the Year 2015 accolade at the WeDO Scotland Awards in Edinburgh after doubling the turnover of his business, the Content Marketing Academy (CMA), in the last 12 months.

Chris, who launched the CMA in 2013, also doubled his team and moved into new office premises at Fife Group’s Mitchelston Industrial Estate complex earlier this year.

He said: “I started out in business for the first time back in June 2013 and, since then, have never benchmarked the performance of the business.

“However, it’s a very nice feeling when a group of business leaders indicate to you that you are doing something right.”

Marketing graduate Chris applied for the award at WeDO Scotland – an Edinburgh-based networking group of which he is a member – but, after a rigorous, three-step application process, was doubtful he would win.
After submitting his initial application, followed by a video, Chris was surprised to learn he’d made the final.

He then beat off stiff competition from fellow entrepreneur Anthony Gerrard, Chief Executive of Glasgow-based Bad Idea, in a face-to-face interview with the WeDo judges.

He said: “It’s a real honour to be recognised for a lot of hard work over the past two years or so.

“It’s also great to be able to show my friends and family that all the hard work has paid off.

“There have been a lot of ups and downs, such as having no money in the bank to start off with. But these things are to be expected in business and I’m very much looking forward to the future growth of CMA.”

Belinda Roberts, founder of WeDO Scotland, added: “We were delighted that Chris won our High Growth of the Year Award in recognition of his continued hard work and effort in growing Content Marketing Academy to where it is now. We look forward to his ongoing growth and success over the coming year and are delighted to have such talent on board at WeDO Scotland.”

Chris was presented with his award by WeDO Scotland Awards sponsor and last year’s winner Martin Walker at a special ceremony at the Sheraton Grand Hotel in Edinburgh.

He’s now looking forward to expanding the team further, moving into even larger premises in due course and to hosting his third Content Marketing Academy conference in 2016.