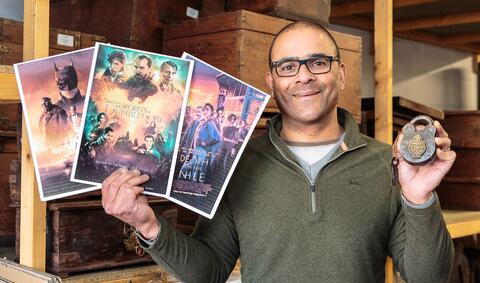 The 17th Hollywood or major UK movie in 10 years to screen their products, it’s the third in just three months to do so!

Then, last month, The Batman, starring Robert Pattinson as the caped crusader, came to the big screen on March 4 including six different vintage padlocks supplied by Scaramanga in September 2020.

The record Hollywood hat-trick completes only the first half of a record six-movie year for the company which sells its interiors, homewares, vintage furniture and bags online and in its Cupar HQ at Prestonhall Industrial Estate – with three more films it’s supplied due to be released by the end of 2022.

It will also see its products used in two Netflix shows and one each on Disney+ and HBO after starting the year with a vintage Prestcold fridge used in an Italian café scene in BBC family favourite Call The Midwife.

2023 is shaping up to be another bumper year on the big screen for Scaramanga – with five films it’s supplied confirmed for release next year and possibly two more global streaming TV shows to follow.

Past films to use the company’s wares include The Hobbit, Paddington 2, Mama Mia! Here We Go Again, Maleficent, Victoria & Abdul, Pan, The Legend of Tarzan, Dark Shadows and Infinite.

Scaramanga has also been used as a supplier of vintage and antique props for TV shows including Strictly Come Dancing, Peaky Blinders, The Crystal Maze, Celebrity Big Brother, TOWIE, Hollyoaks.

To celebrate its movie hat-trick, Scaramanga is celebrating with a competition on its social media.

Speaking about the firm’s latest silver screen success, Scaramanga founder and Managing Director Carl Morenikeji said: “Seeing our products used in film and TV productions is always a special moment, but to have grown our reputation for vintage and antique lifestyle products to the point where we have them in Hollywood movies being released in three consecutive months and six in one year is far beyond anything I could have imagined when our antique trunks and chests appeared in our first movie, Dark Shadows, 10 years ago.

“I’m grateful to the props buyers for their loyalty in using us and our staff for continuing to meet their needs so well and quickly, which is often a crucial factor when props are needed for a scene being shot the next day.”

Anyone wanting to bring a bit of Hollywood vintage lifestyle into their home should visit Scaramanga’s website at scaramangashop.co.uk