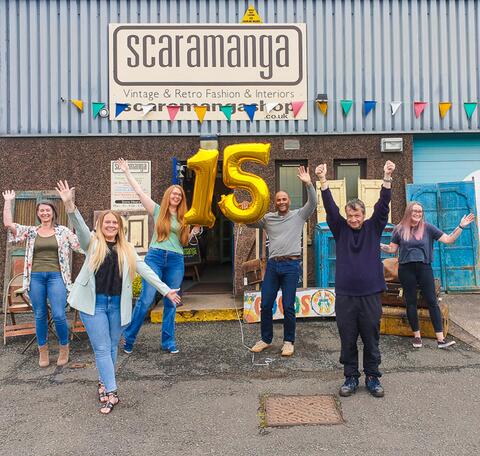 The firm, which employs eight people at its Prestonhall Industrial Estate base, has been running a series of promotions to celebrate its birthday on September 17 and will donate 15% of the profits from the campaign, which ends on September 19, to the charity.

The promotions include a ‘golden ticket’ for a £250 voucher to a lucky customer in their order, 15 prizes allocated at random to customers by number selection, a new gym bag to celebrate the event with the social media user suggesting the best name winning one and 15% discount on many items.

Scaramanga, which sells its own design bags, vintage furniture and homewares online as well as in its Cupar HQ, has supported Cupar foodbank before – in 2014 it held an auction on Facebook for four of its leather bags, raising more £300.

Its Digital Marketing Manager, Samantha McBride, has also been volunteering at the foodbank since February after organising a fundraiser for it in her previous job and being impressed with its work. “We helped deliver the food parcels at Christmastime and it was eye-opening how close to home and how many people were struggling to buy food for their families, so it was always on my mind to try and help a little more,” she said. “Since then, my partner Steven and I have donated food parcels occasionally, especially around Christmas, and I just wanted to help contribute to a little more.”

The company, founded by Carl Morenikeji in 2006, is also celebrating the UK release of its 13th movie customer tomorrow (September 11). Mark Wahlberg sci-fi action film Infinite bought a set of four metal folding chairs in October 2019 for use as set props and everyone at the vintage specialist is looking forward to seeing where they’re used.

The firm has also seen it products used in UK TV shows including Strictly Come Dancing, Peaky Blinders, The Crystal Maze, Celebrity Big Brother, Jericho, Hollyoaks and 60 Minute Makeover and more recently in global streaming shows The Third Day and The Nevers on HBO, The Irregulars on Netflix, and War of the Worlds Series 2 on Disney+.

Speaking about the multiple celebrations and fundraiser, Carl Morenikeji said: “We feel blessed to be celebrating our 15th birthday and a new movie client at a time when so many small companies have been badly hit by the pandemic, so feel we should share our good fortune with those people in our local community who are struggling with the most basic needs.”

If you want to help Scaramanga raise money for Cupar foodbank, go to the firm’s website or social media for how to take part in its birthday promotions.